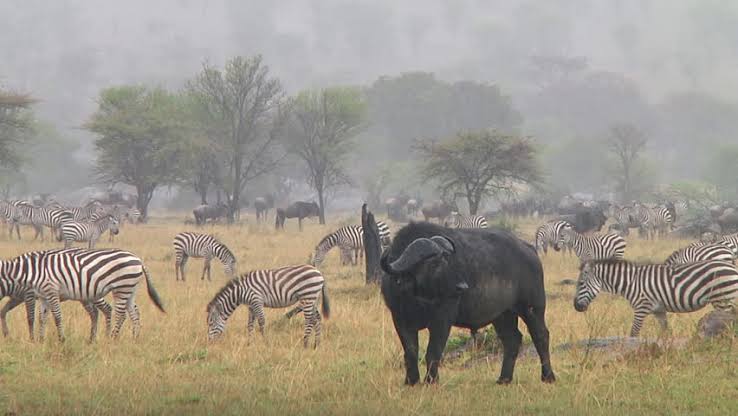 Serengeti National Park March is a rainy month in the park but attracts a large number of travelers to come and engage in the park activities. Serengeti national park remains with no doubt one of the best national park not only in Tanzania but the entire world. Voted as the seven natural wonders of Africa, the park hosts the world’s second-largest animal migration after the Zambia Bat migration. The park is characterized by the open savannah with dotted Acacia trees that makes the local Maasai people describe it as “serengit” which means the endless plains. The open short grass at the park makes the guests see as far as the eye can see with limited interferences. Serengeti is one of the premium national parks in Tanzania that forms the famous Northern Tanzania tourist circuit. The Northern Tanzania circuit includes the Lake Manyara national park, Tarangire national park, Ngorongoro crater, and the famous Serengeti National park.

The weather of Serengeti national park is favorable which is characterized by warm and wet weather. The park, like any other African country, receives 2 rainy seasons with the first rains being more longer and much than the second rainy months. Most of the time of the Serengeti is dry and this has made the wildebeest migration circular and occurring throughout the year. The wildebeest migration follows the rain fall patterns as they look for short fresh grass and water. The two rainy seasons start from Late February to May and the other starting from late October to November. The other months are dry months that start from June to October and again from December to February.

Serengeti national park March is one of the remarkable months at the park that signifies the beginning of the rainy season. It is not only the rain season but a longer rain season that takes two to three months. During this period of Serengeti national park March, you have to select the best area to be while in Serengeti since some of the camps especially the mobile camps close up during this period. The Serengeti national park March is also the month when the calving season is getting done and the wildebeest migration starts coming to the central Serengeti from Southern part of the park bordering the Ndutu Area of Ngorongoro. March is the best month of enjoying the central Seronera area with active nature and wildlife action as the little unsteady wildebeest will be at the test with the large prides of Lions found at the center of the park.

The birders enjoy Serengeti national park March since it’s the breeding season of the birds and the park welcomes most of the migratory birds from different parts of the world. It’s a unique month that gives guests quite an act of adventure, the park is quite since there are few moving cars. This time is also called the low season of Serengeti due to the low volume of visitors at the park during this time. If you prefer to hit the game with maximum privacy this is the best time. The camps lower their rates and you enjoy discounted rates during your safari hence budget-friendly but luxury wildlife experience.

During Serengeti national park March, the game drives are a must to be done in 4×4 wheel drive cars since the mad will be much at the park. The water catchment areas are impassable during this period but the wildlife is plenty. Lions wake up early for sunbathing at the isolated Kopjes around the park, the rare black Rhinos are expected much visible due to the favorable cool weather. March is fairly the best month for the one-month-old wildebeest calves that were born in late January to Early February. The young calves enjoy feeding much of the time with the lush delicious and nitrous grass. You find millions of the wildebeest converge around the Southern to the central part of Serengeti national park during Serengeti national park March.  The wildebeest herds start their slow movement as they keep predicting the weather (rains) as they keep tight security to their young ones amidst the eyes of predators.

The best area to stay during Serengeti national park March.

When talking of Serengeti national park March, the key activity in mind is witnessing the wildebeest calving season. This happens ones in a year and to enjoy the activities you have to come early in late February. Thousands of the young calves are born daily and the predators especially the lazy hyenas are at the watch. It’s a unique venture.

The other active activity done in Serengeti national park March is birding. The park receives more migratory birds from this time to late April who comes for breeding. This is the breeding season for most birds and birders will enjoy the long list of birds during their stay at Serengeti national park. However much it’s a rainy season, the rains are always witnessed at night and if day time they are short hence does not interfere with the daily wildlife experience during your visit to Serengeti national park.

You only need to have a good packing list when traveling to Serengeti during the month of March. The reputable tour operator will take you through the parking list when booking a safari with them. You can also have a view of the Serengeti national park March parking list below:

In conclusion, do you need to have a secret and most luxurious wildlife encounter in Serengeti, then select the rainy months. The visitors’ numbers are low making you enjoy game drives even at the pace of your balcony since the park is in total silent. The accommodation rates are discounted hence budget-friendly and its best for the true African wildlife experience.