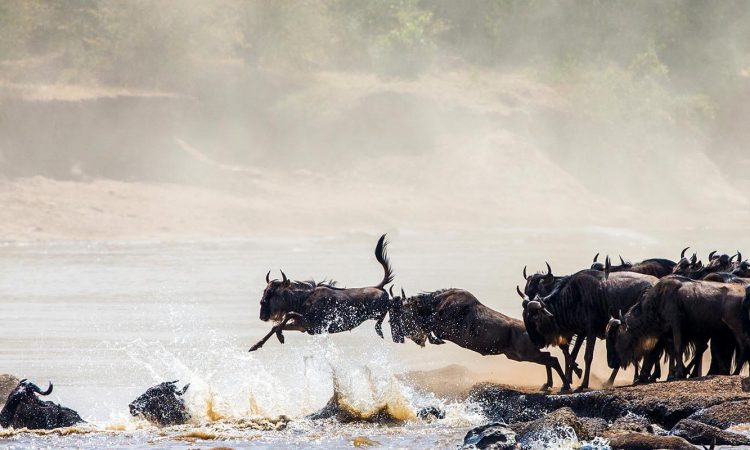 This wildebeest migration event is much recognized in the tourism and hospitality industry globally. It attracts millions of tourists who come to witness the world cup of animals at the stadium of Mara river while the Crocodiles as referee who like giving red cards to the players through preying on the millions of wildebeest and thousands of Zebras which cross the river to the Masai Mara national reserve. The area harbors the highest number of cheetahs in Serengeti National Park near the Gol mountains at the edge of Northern part of Ngorongoro conservation area.

Serengeti national park gives guests a good view of animals throughout the year especially areas like Seronera, Grumeti River and Ndutu areas. The wildebeest migration in Serengeti National Park happens in five sectors or regions of the park, each happening on different time of the year hence making Serengeti National Park one of the best destinations voted several times in Africa.

Below are detailed wildebeest calendar programmes which helps you to plan and catch up with your wildlife tour of life time:

The wildebeest will cover the areas of Kusini of Serengeti park and Ndutu of Ngorongoro conservation Area along the Maswa Game reserve. Kusini Kopjes are a home for the Cheetahs, leopards and the lions who hide and ambush the grazing wildebeest. The ambushed wildebeests are especially those which move a small distance from the team because they make it easy for the predator to attack..

The wildebeest together with Zebras, kobs and other grazers gather on the Ndutu plains to build up their strength after giving birth to the young ones. It is on record that over one thousand young ones are born on daily basis and this attracts more predators as food is plenty through taking the advantage of the newly weak born animals.

On this open grass land in Ndutu which is rich of food values and fresh for the young ones to eat, the wildebeest takes the one month of February from this area before March when they start their journey migrating back to Serengeti National Park through Kusini where the survival for the fittest still takes place with various ambushes of the predators along the way in the Acacia woodlands and Kopjes all acting as hiding places for the predators

When the wildebeest move on, the area is still rich with wildlife, especially fauna depending on the protective microclimates of kopjes, where water collects in basin-like rocks and predators, including lions and jackals, keep vigil from above to see what prey will come to drink. Bizarre aardvark and pangolin feed from towering termite mounds. African hedgehogs, hares and voles dart around the rocks, whilst gaudy lizards scurry over them.

Southern Serengeti especially around the Maswa Game Reserve provides dry season pasture for the animals. This makes more animals head to that area even if it’s not for calving like Buffalos Impalas, Gazelles among others.

This Western wildebeest migration occurs during the rainy season in Serengeti national park. That is around April to early June. Large herds of different grazers led by the Wildebeest and followed by other grazing partners like Elands, Zebras, Gazelles and others mill around the Western Corridors of Serengeti south of Grumeti River.

The Western Serengeti safaris takes you beneath an infinite sky of the endless plains of Serengeti as you watch this drama happening live. There are some permanent residents of the wildebeest population who do not migrate but always live around the seasonal Mbalageti River. The mbalageti river runs dry during dry season but before, that the river supports more animals in the area.

Mare beautiful and rare wildlife around the Grumeti River like the Black and white colobus monkey, patas monkey, olive baboon, impala, topi, waterbuck, wildebeest, antelopes and others. During the night game-spotting drives in the private wilderness, look for elusive leopards or nocturnal porcupines, aardvarks, honey badgers and bat-eared foxes.

Every wildebeest has a dream to cross and survive yet the crocodiles also count on the animals for their dinner and lunches hence making everything strange as they have to go for the survival for the fittest. The high cliffs of the rift valley escarpments make the river deep and not easy to have a U-turn. Once you’ve entered the river, there no looking back. Other animals to see during the northern wildebeest migration are the elusive Leopards, hippos, Hyrax, Mongoose and others.

Where do the wildebeest migrate to and from?

Wildebeest migration of Tanzania is a worldwide event that is recognised by every traveller wishes to see when he or she travels to Tanzania. Counted as one of the seven wonders of the world, the wildebeest migration takes tourism experience to another live level not just seeing lazy grazing animals but action parked movements where every wildebeest has to be careful and defensive during the movement.

It’s much common that the strong male wildebeest leads the large herds of fellow wildebeest mixed with other grazers in the team, they plan on the routing by gathering together before they start their journey. It takes the animals few days to plan and start slowly their movement towards the targeted area depending on the season of the year if it’s in July to September then they move to the Northern Serengeti as they prepare to cross the Mara Rive to the Kenya greatest reserve Maasai Mara.

The circle of Wildebeest migration is circular making the movement to occur almost throughout the year that is they start from Serengeti Seronera area as their focal point depending on the time of the year either to the South to Ndutu in Ngorongoro or to the North to Maasai Mara in Kenya which involves crossing River Mara, it can also be to the West of Serengeti in Grumeti River.

The wildebeest migration covers three destinations those are Ngorongoro conservation area, Serengeti National park and finally Maasai Mara national Reserve. The wildebeest rotate within these destinations from one area to another as they look for green pastures and water, the calving season takes them to the Northern Ngorongoro during rainy season.

Many die while crossing from Serengeti to Maasai Mara yet again another death toils again as thousands still loose their lives before landing back to Serengeti once again. There journey is always to and from Serengeti, the wildebeest goes to Maasai Mara to search for green pastures then come back when the short rains start again in Serengeti side that is in October.

The wildebeest move from Kusini in Serengeti down to Ndutu of Ngorongoro, the movements always start from January to February and its mostly the female wildebeest which lead the move as they go there to give birth. This migration is called calving season and very special to the wildebeest as they go for celebrations as they welcome the new born calves.

All the above migrations happen from Serengeti and back to Serengeti where the wildebeest spend much of the time of the year.