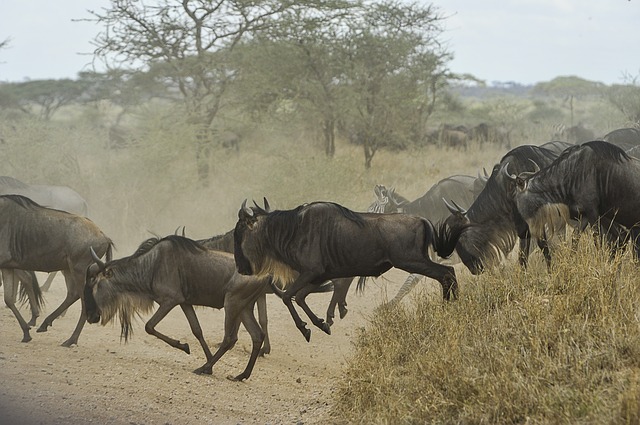 The great Serengeti Wildebeest Migration is rated as one of the seven natural wonders of the world and has continuously happened for the last 1 million years. Every year a million wildebeest, zebra and antelope migrate clockwise around the Serengeti – Masai Mara ecosystem, taking in two different countries and making time for birthing, courting and mating on the way.

Serengeti Wildebeest Migration – November to June. The rains are the triggers of this spectacular annual migration the involves more than two million blue wildebeest, together with a quarter of a million Burchell’s zebra and half a million Thompson’s gazelles. Once that rains start, they rejuvenate the withering grass almost immediately giving visitors a perfect opportunity to view massive herds.

The herd begins by moving down the eastern corridor of Serengeti from Kenya’s Masai Mara national park sometimes around late October, and early November to the short grass plains of the southern Serengeti, below the Ngorongoro Highlands which come alive in December not only with gazing mammals, but with a carpet of fresh green grass shoots and colorful wildflowers.

The Serengeti Wildebeest Migration believe in large groups and therefore young calves spring forth in a period of three weeks in the course of February all over the plains. Actually young ones are born all over the plains including – cheetah cubs, bat-eared fox pups, and tiny Thompson’s gazelles all appear at around this time.

This also triggers more predators. As the dry season draws closer the herds begin their journey in June until July and early August – they are in the western Kirawira reaches of the Serengeti.

From here they continue northwards across the Tanzania and into the Serengeti’s extension there, better known as the Masai Mara National Park.

Many of them die during the transition from hunger, drowning, plagues and others are eaten by predators. The survivors will spend September and October here until the grazing is exhausted before the relentless cycle begins again and they head south once more.

Although there is no guarantee to the process because of natural factors that can alter the patterns by weeks , the migration has to happen every year almost around the same time.