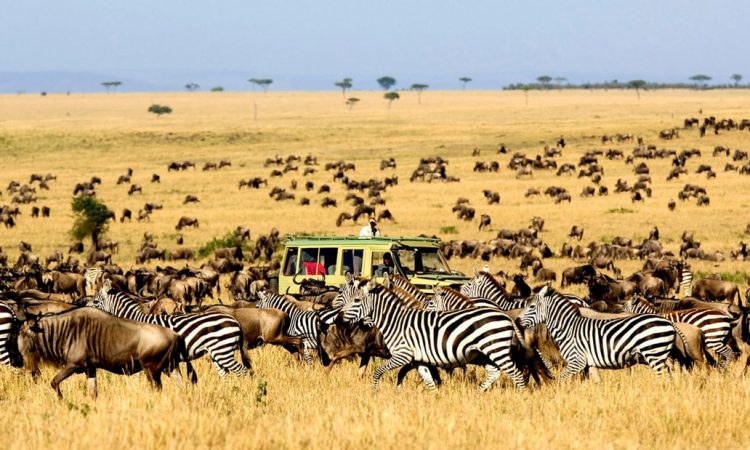 Serengeti national park wildlife Safaris is the greatest experience nature lovers enjoy while in Tanzania. One starts seeing animals from the branch of the Main road that goes to Babati to Lake Manyara region.

The Serengeti national park wildlife Safaris are extraordinary, passing through Lake Manyara seeing Olive Baboons matching along the road as they are called school boys, have a great aerial view of the largest caldera in the world.

Tourist flock Serengeti during this period and most of the migratory tented camps are found on the Northern part of Serengeti while the Hot air Balloon also are shifted to this area to give the guests an aerial view of the migration. This live event is recorded as one of the Seven Wonders of the World that happen every year at Serengeti national park. Another wildebeest migration season is on the Southern part of Serengeti to Ndutu Area where the calving season takes place in Ngorongoro one area with most nutritious grass during January to February which is good for the newly born calves of the wildebeest.

The balloon safaris in Serengeti are operated by the Balloon safari company and the Miracle balloons. These is the best way of enjoying the aerial view of the wildlife in Serengeti national park especially the clear view of actions like hunting lions, wildebeest migration and many more.

Balloon safaris come with an extra cost after paying the park entry fees and conservation fees, they balloon starts from 5 am with a pick up from your camp and drive to the starting point of the balloon. Starting with briefing from the pilots, you will fly and float gently at the height of 1000 meters above flowing the movement of animals. You will enjoy African sun rise while of air enjoy the best bush breakfast after the balloon and toss of wine.

This is restricted to only researchers who are licensed and accompanied by the game rangers who are armed. This is the best way to get as close as possible to nature, better experience for birders and others who like nature Nature walks in Serengeti are restricted and are not allowed any howly, they have specific places they allow walking safaris at the park.