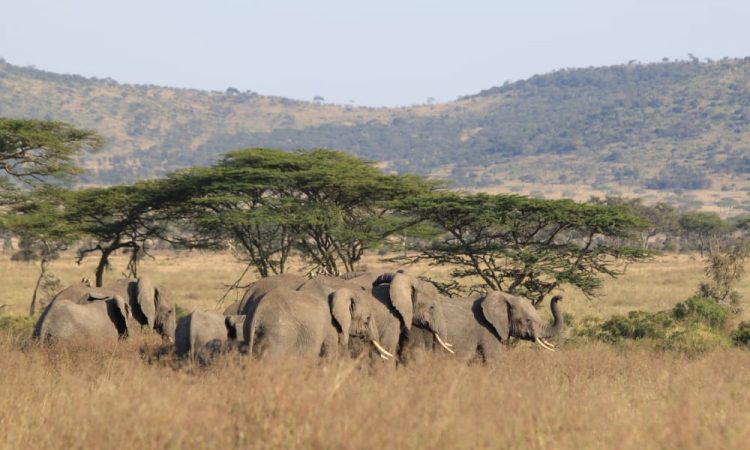 Yes, Serengeti National Park is one of the best places to visit in Africa for a Tanzania wildlife safari. It has been selected as the top African safari park for many years and counting. It is ranked as the best safari location for a number of reasons, including its natural beauty, animals, and landscape—an endless plain. Once more, Serengeti National Park is open to all types of visitors, whether they are a family, a couple on their honeymoon, a group of friends, a child, a single traveler, etc., Serengeti has it all for everyone to enjoy and have a once-in-a-lifetime safari experience.

Why is Serengeti Africa’s top safari park? Continue reading to learn why so many visitors adore this wonderful park. Imagine being surrounded by miles of rocky savanna, watching rhinos and elephants curiously observe your jeep as it passes by; hippos emerge from their watering holes to scan the area for predators; herds of wildebeest are swarming the park like bees; and in the distance, Mount Kilimanjaro, the tallest mountain in Africa, rises up. Isn’t that amazing? Yes, it is, obviously, which is why the majority of visitors choose Serengeti National Park as their favorite safari park in Africa. Additionally, there are other factors that contribute to Serengeti National Park’s popularity and ranking as the top safari park in Africa; if you keep reading, you will learn about them all.

It would be an understatement to say that Serengeti National Park is rich in biological diversity. More than 500 different species of birds, zebras, lions, cheetahs, wildebeests, honey badgers, buffalo, leopards, giraffes, gazelles, crocodiles, and more are just a few of the animals we’re talking about. The Serengeti plains are home to one of the planet’s densest concentrations of wildlife, with more than 430 different species wandering freely there.

The enormous park, larger than the state of Connecticut at 5,700 square miles, serves as a wide birthplace for the intricate cycles of migration. The sheer number of species you’ll see is amazing, so you’ll want to make sure your camera has plenty of storage.

As a result, the Serengeti is the best African safari park. The annual great wildebeest calving migration circles clockwise across the Serengeti National Park and north toward the Masai Mara reserve in Kenya. It starts in the Ngorongoro Conservation Area of Tanzania’s southern Serengeti. The availability of grazing owing to rain and its availability determines the Great Migration, a natural phenomenon. Around January, when the calving season starts, the first point or stage of migration begins,Why Serengeti is Africa’s Best Safari National Park

In quest of green pasture, more than 2 million wildebeest, about 470,000 gazelles, and 260,000 zebra begin their anticlockwise migration from Maasai Mara to Loliondo, the Ngorongoro crater, and the southern Serengeti. Wildebeest spend this time grazing on the short grass plains in the ecosystem’s southeast, where they give birth to more than 0.5 million calves over the course of two to three weeks.

Historically, the phrase “the Big Five” was first used by hunters. The most coveted creatures were leopards, lions, buffalo, elephants, and rhinos since they were the most difficult to kill. Since then, things have changed, and now it is park visitors and safari travelers who are searching for (and using binoculars to view) these five great beasts.

The Big Five are as follows:

These large cats, known as African Leopards, can be entirely black, white, or cream-colored with numerous black patches. They are challenging to locate because they only emerge at night.

The African lion, which is larger than leopards by more than twice as much, is undisputedly the ruler of the forest (or savanna). Lions lurk among the tall grasses and shrubs, using the cover of the vegetation as natural camouflage. When they suddenly emerge from hiding, they catch their prey off guard.

The only non-endangered animal on the list of the Big Five is the Cape buffalo. Given that they actually kill more hunters each year than any other animal, this is an intriguing fact.

The largest land animal is the African elephant, which is also the most endangered. Despite the fact that hunting these very intelligent herbivores has been forbidden since 1973, it has been done for years because of the price of ivory.

The Black Rhinoceros, also known as the Hooked-Lip Rhinoceros, weighs between 1,760 and 3,090 pounds. It is a critically endangered species.  The Serengeti is considered the best African safari park to see the Big Five since it is so much easier to observe them than in any other African park.

The variety of its ecosystems is what makes this area such a hospitable home to so many different species of wildlife. The park is typically divided into three quadrants to describe them:

The Northern Serengeti is a mountainous, undulating area with a high concentration of giraffes and elephants amid lush woods.

The Serengeti Plains are generally what comes to mind when you think of the Serengeti. The absence of trees allows you to see for kilometers in all directions, and the vast grasslands are teeming with herds of roaming animals.

The Western Corridor, whose black clay soil stretches out to the banks of the Grumeti River and is inhabited by Nile crocodiles, hippos, monkeys, and other species of wildlife, is the center of the savanna.

Serengeti National Park is a UNESCO World Heritage Site, which is hardly surprising given its abundance of wildlife. The plentiful and diverse plant life present in the park is another essential component of the multiple ecosystems. The guides who work there are all very knowledgeable about the local flora and fauna and can assist you in recognizing the magnificent things that are all around you., Why Serengeti is Africa’s Best Safari National Park

It makes sense that a region with such a vast range of plant and animal life would also be home to a wide range of people. In the immediate area, there are more than 120 different ethnic groups. People of Muslim and Christian faiths mix with a wide range of indigenous traditions to create a lively melting pot of civilizations.

Numerous tour companies provide opportunities to explore nearby villages, learn about the locals’ way of life, and engage with their cuisine, music, language, and culture. If you’re fortunate, you might even get the opportunity to witness the Maasai jumping dance, which is a sacred ritual. You will learn fresh perspectives on the world from events like this, and you will remember them for the rest of your life.

A Safari in Africa You won’t have to miss out on the top Serengeti Safari Tours for your lifelong vacation experiences. Serengeti National Park, which boasts incredible wildlife and an empty plain, provides distinctive safari tours that draw many visitors. Every traveler’s first stop in Tanzania’s vast national park safari is Serengeti National Park. From the independently standing Mount Kilimanjaro to the most famous crater in the world, which is shallow and has a hippo pool, a walking safari, and an unspoiled indigenous culture (the Masai people), Tanzania is a unique destination to visit.

Although a guided jeep tour is the most popular way to get about the park, there are other possibilities. In contrast to travelling in a car, some visitors opt to take a walking safari tour of the park, which enables you to get up close and personal with the wildlife and landscape, Why Serengeti is Africa’s Best Safari National Park

Some companies like Focus East Africa Tours even provide hot air balloon tours, where you may saunter leisurely over grasslands and savannas. Some tourists remark that the most breathtaking thing they have ever seen was a sunrise over the Serengeti from a hot air balloon.

The Greek philosopher Heraclitus once stated, “No man ever steps in the same river twice, for it’s not the same river and he’s not the same man.” This statement regarding Serengeti National Park could hardly be more accurate. Tanzania is a popular destination for tourists because every visit offers something new and exciting. With more than 4 million wild animals living in this spectacular wilderness, nature is unpredictable and always changing, making it impossible to observe the same thing twice, Why Serengeti is Africa’s Best Safari National Park

Because young newborn calves are a prime target for predators, the offspring have hard time to survive. When the rains stop, the animals began to go northwest and stayed there until the end of June. Since the crocodile is waiting in the river for the wildebeest crossing to happen so it can trap them for food, you won’t want to miss the crossing of the Grumeti River and the Masai Mara on your Serengeti safari trip.

The vast herd of zebra began crossing the Mara River, traveling into the Maasai Mara in Kenya at the beginning or mid-July to the end of August in the Lobo area of the Northern Serengeti National Park (Kogatende).  It is recognized for having one of the greatest predator densities and significant concentrations of fauna. All of the game animals, including the elusive black rhino, kongoni, giraffe, elephant, eland, topi, and buffalo, are plainly visible in the Serengeti.

Are You Prepared to Visit the Best African Safari Park in the World? We hope that by this point, you have come to the conclusion that Serengeti National Park is the very best African safari park. If you’re ready to tick this natural marvel off your African bucket list, start packing. If you have any concerns about scheduling or organizing your once-in-a-lifetime Serengeti safari, email us. We’re here to help you with everything to make your trip memorable and fulfilling.