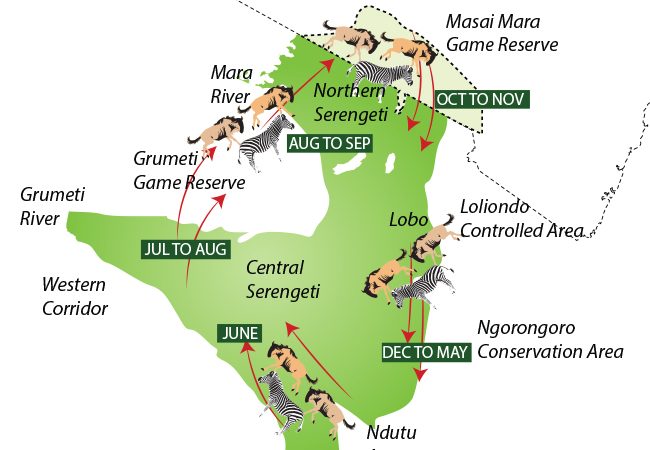 The Great Migration, also known as the Wildebeest Migration, is a vast migration of over a million animals from the Serengeti to the Masai Mara, including wildebeest, antelope, zebra, and big cats like lions.

The migration is an annual clockwise movement that spans Tanzania’s Serengeti and Kenya’s Masai Mara, and is governed by a variety of factors such as weather, forage, and mating birthing cycles. The wildebeest migration from the Serengeti to Kenya’s Masai Mara reserve is one of the most captivating natural displays on the planet, The Great Wildebeest Migration – Frequently Asked Qtns.

Wildebeest move due to seasonal rains and a desire for green grass.

The Wildebeest Migration is a year-round, round trip with unpredictable river crossings. In Tanzania’s Serengeti, the migration normally lasts 9 months. During August, September, and October, it is most active in Kenya’s Masai Mara. Choose between Kenya and Tanzania if you want to go on a migration safari.

The Serengeti Plain, which runs along Tanzania’s northern border with Kenya, is where the Great Migration begins. Serengeti National Park (Tanzania): As vast herds of Wildebeest and Zebra begin to assemble, this is undoubtedly one of the greatest spots to observe the Great Migration. The Grumeti River is a formidable obstacle that the animals must muster the bravery to cross.

The wildebeest migration takes place every year, when over a million of these gentle creatures, accompanied by tens of thousands of zebras and other herbivores, arrive in large numbers from Tanzania’s Serengeti.  Between January and March, the herds stay in the southern Serengeti to eat on the rich, wide plains of new grass before moving northward. The herds reach Grumeti, an isolated location in the north, around June, following heavy rains in the Serengeti’s main portions. The herds travel north into Kenya, crossing rivers as they go.

The Masai Mara, Kenya’s most well-known reserve, is home to undulating hills, rolling grasslands, and rivers that serve as a backdrop for the migration. At Masai Mara, game drives are available in a minibus or a four-wheel-drive vehicle with an open roof hatch. Because walking is not permitted in the Serengeti National Park, you will need to make arrangements for game watching with pop-up tents in order to fully immerse yourself in the excitement of this natural wonder. A hot-air balloon ride over the wildebeest migration is another option for viewing the migration in both Serengeti and Maasai Mara, The Great Wildebeest Migration – Frequently Asked Qtns.

Wildebeest and other herbivores follow the rains in a clockwise circuit that stretches over 1,000 miles each year. As a result, the amount of nutrients available in the ecosystem’s fresh grass is a crucial component that impacts this regional trajectory each year.

The Masai Mara National Reserve is recognized as a year-round safari destination because of its great temperature and abundance of resident species, which allows for outstanding game viewing. The best time to see wildlife in Kenya is during the dry season, which runs from late June through October. This is also when the magnificent wildebeest migration takes place.

Wildebeest are thought to follow the fragrance of rain on the parched Serengeti soils in order to seek greener pastures, according to scientists. The Earth contains a magnetic field, and while humans can’t see it without a compass, some animals can feel it and utilize it to guide their migrations.

Seeing the Serengeti calving season requires some preparation ahead of time. Despite the fact that it is the low season, hotels fill up quickly. The months to visit are January, February, and March; if you have specific dates in mind, we recommend scheduling up to a year ahead of time, especially in February when the calving season is at its peak, The Great Wildebeest Migration – Frequently Asked Qtns.

Because the migration is continuing, you can visit at any time of year to witness this natural wonder in all its splendor. From July to October, the busiest travel season, try to consider how important it is to visit when there are fewer vehicles on the road. Long rains are common in April and May, making it difficult to spot the herds on the move. The best time to view a river crossing is between July and October, when the herds must cross the Mara River in search of fresh grass. Around July, when the Great Migration reaches the opposite side of the Mara River’s main ford, the Masai Mara National Reserve sees the most visitors.