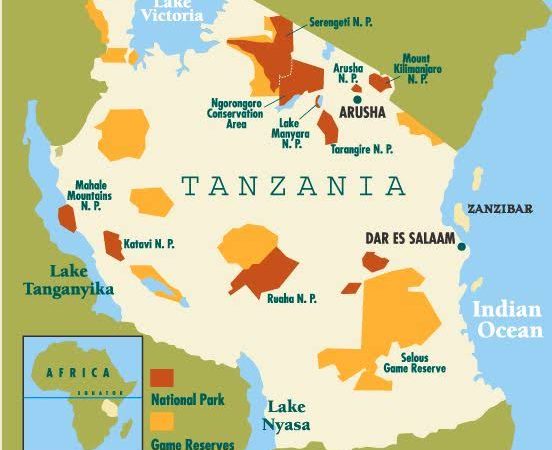 Serengeti national park map Tanzania shows the coverage and division (sectors) of the famous Serengeti national park. The endless plains of the mighty Serengeti which the locals named as “Serenget” meaning the endless. Serengeti is one of the most famous national parks not only in Tanzania but the entire world. Voted as seven natural wonders of the world is a home of the second largest mammal migration on planet earth. The park habits all the African big 5 (Lions, leopards, buffaloes, Elephants, and Rhinos) Other big game found at the park include Wildebeests, Gazelles, Zebras, topis, kudus, dik-dik, oribi, and others.

Serengeti national park is located in the Northern tourist circuit that covers the most famous Tanzanian protected area like Ngorongoro Crater, Lake Manyara and Tarangire national park. Serengeti is found in the Northern part of tourist town Arusha. It takes 6 to 7 hours drive from Arusha to Serengeti depending on the sector one is going but the drive is worth it with great scenic views of the park.

Serengeti national park Map Tanzania also highlights the neighborhood of Serengeti national park. This shows all the neighbors from different directions. In the North, Serengeti is bordered by the Kenya Masai Mara national reserve that forms the Mara-Serengeti ecosystem. In the South its bordered by Ngorongoro Conservation area which extends the Mara-Serengeti ecosystem making it the largest ecosystem and the oldest ecosystem. In the West, Serengeti is bordered by the game reserve those are Loliondo game reserve and on the East its bordered by Maswa Game Reserve. Serengeti is neighbored by only protected areas making it a good deal for the all year wildebeest migration freely. This makes the complete circuit of the wildebeest migration that starts from the Ngorongoro Conservation Area through the Grumeti river on the west to Masai Mara national reserve on the North.

Serengeti national park is composed of some sectors that are categorized using the directions. The sector include the Northern sector, Southern sector, Central Sector and the Western Sector. All these sectors are the wildebeest migration routes hence making each sector to be important on its own and great to visit on a specific period of time of the year. Except central which is great throughout the year, others are determined when the wildebeests are found.

The central Serengeti is also called Seronera area is a key in the Serengeti national park Map Tanzania. This is a center of action in Serengeti that inhabits more wildlife and accommodations. The Seronera area is drained by the Seronera river which is a source of water for the wildlife. Most of the game drives are done here and the wildlife is more permanent. The wildebeest migration is found at the center from late Match to April before they start their journey to the Western Corridor. The center has the highest concentration of wildlife especially the big cats Lions, Cheetahs and Leopards that sit in the dotted Moru Kopjes found at the central part of the park. The Seronera has the busiest airstrip called Seronera airstrip with is serviced by many domestic airlines across East Africa. Its also dominated by luxury and midrange accommodations that are permanent like Serengeti Serena lodge, Sopa lodge, seronera wildlife lodge, Serengeti heritage tented camp, Tortils Camps, Serengeti Oticon Camps, and others.

Due to the availability of the Seronera river that drains the central part of the park, the wildlife viewing is done throughout the year. The game drives are more rewarding and are excellent year in and year out. The effect of wildebeest migration is not much felt after they have left since the majority of the wildlife is permanent. Other key points in the Seronera area include the fuel pump station, Park headquarters, Tourist center and others.

This is more famous due to the wildebeest migration and the availability of the shy rare black rhinos that are found on the thick thickets. This is the climax point of the wildebeest migration when they cross the Mara river to Masai Mara national reserve. The Northern is the border between Tanzania Serengeti and the Kenya Masai Mara national reserve. Guests flow much in the north during the wildebeest migration period that is from July to August. There are more good luxury accommodations and some mobile tented camps found at the area. Accommodations are booked in advance if you want to get accommodations that are close to the river. There are several airstrips also that service the Northern part of Serengeti national park like Kigotende. The best time to have safaris in the Northern Serengeti is from June to October when the migration is on the Northern side.

The calving destination which starts from January to February this is the best time to visit the southern part of Serengeti. The Southern part overlaps up to Ngorongoro Conservation Area in Ndutu area where the maternity ward for the wildebeest. Enjoy thousands of the newly born calves born daily on the open plains of the savannah.

This is the return route of the wildebeest migration, its funny that the migration enters the Masai Mara on the South and departs on the East back to Serengeti. The sections highlights the complete movement of the wildebeest migration. The size and subdivision of the park makes it great news that the park can be visited throughout the year. You only need a well organized reputable company to advise you well when to visit which sector.

The Serengeti national park Map Tanzania helps guests to plan when for their Serengeti safari. Select the best lodges following the good location of the lodges. Each section has lodges that range from luxury to budget lodges depending on the budget of the guest. 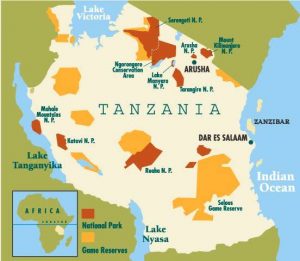