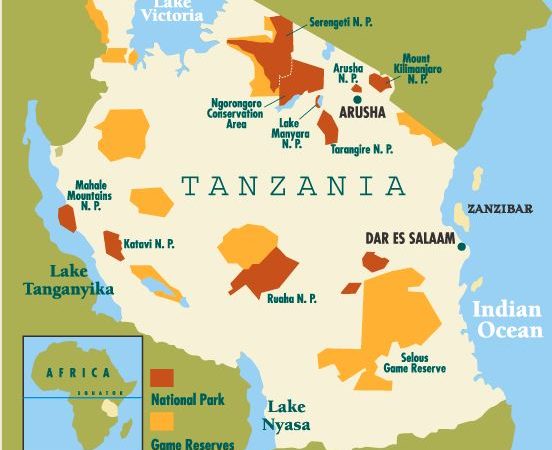 Tanzania has 16 national parks and 3 Game reserves located across the republic of Tanzania dotted both in the South, West and Northern part of Tanzania hence making all the attractions balancing in the country.  Tanzania has been voted several times as the best tourism destination not only in Africa but the globe at large and this has been successful due to the hard work by the local community and the Tanzania National Park Authority who have fought other illegal killing of animals in the park, allowing the local communities to be part of the parks and conservation for instance in Ngorongoro Conservation Area animals live together with humans peacefully.

Below are the lists of the Tanzania national parks

Arusha national park has the greatest variety of wildlife as favoured by the different ecosystem of the park ranging from the second highest mountain that is Meru to the low land swampy areas of the park. Despite its size, a reasonable number of animals like Giraffes, buffalos, warthog, Zebras, Elephants and different types pf Monkeys for instance the black and white Colobus monkey, Blue monkey and others. Big cats are also present though they are rarely seen making locals to always term it luck if one sees the big cats.

The home for Chimpanzees are other primates, located in the remote Western side of Tanzania in Kigoma region just a few kilometres away from Kigoma town is the smallest national park of Tanzania covering only an area of 35 square Kilometers at the shores of Lake Tanganyika.

Gombe Stream was established in 1968, the park is one of the first African park where chimpanzee habituation was done credit goes to Goodall who pioneered all the chimpanzee research in Gombe stream national park. Goodall made documentaries about chimpanzees in different books, the park can only be accessed by boat making it one of the most expensive parks in Tanzania.

Katavi national park habits a lot of wildlife from the big large herds of animals to the rare bird species, the most popular animals include Buffalos, Wildebeest, Giraffes, Elephants, Zebras, Crocodiles, Hippos, big cats are also easily seen especially lions, Cheetahs and leopards while other predators are Hyenas, wild dogs.

Lake Manyara National Park is located on the Northern Tanzania, its one of the parks that form the supper Northern tourism center of Tanzania alongside Ngorongoro, Serengeti and Tarangire national parks. Northern sector is the most popular tourism sector in Tanzania hosting over three quarters of the total tourists that visit Tanzania.

Lake Manyara National Park was established in 1960 with a total area of 330 square kilometres though almost 200 square kilometres is occupied by Lake Manyara the soda lake located inside the park. The park is more famous of its tree climbing lions which can be easily seen swimming on the branches of the trees, leopards and the baboons.  Lake Manyara inhabits a lot of wildlife like giraffes, Buffalos, Elephants, antelopes, hippos and others, over 400 bird species with Flamingos covering most of the lake side. Other activities in the park are the boat ride at the lake though its seasonal, Hot springs and tree walk.

The park is located in the Northern part of Arusha reachable within 2 hours drive along the good smooth tarmac road passing through the local Maasai villages, it 126 kilometers away from Arusha passing through Babati town the capital of Manyara region. Lake Manyara has an airfield called lake Manyara airfield located at the top of the great rift valley wall.

Located in the shores of Lake Tanganyika it’s a neighbouring park to Gombe stream National park, its found in Kigoma Region named after the mountains of Mahale found in is border. Mahale is one of the only two national parks in Tanzania where one can see the Chimpanzees. It has great record on the number of chimpanzee’s population in Tanzania.

Mahale Mountains national park is the only park in Tanzania where one can see lions and chimpanzees on the same park, the funny part of this park is that there no developed infrastructure like Lodges or road network within the park hence making the park hard to access unless one used the boat.

Kilimanjaro national park cover an area of 753 square kilometres, Mount Kilimanjaro is the highest free standing mountain not only in Tanzania but the whole world first designated as a forest reserve in 1921 by the colonial Government before it was officially classified the national park. The park is unique with a variety of fauna and flora in the park located in different altitudes of the park as you go high and higher. The bottom forested areas are occupied by animals like Forest Elephants, Bushbucks, Red Duiker, Buffalos, bleu monkeys, black and white colobus, leopards and bush babies.

This is the pride of Southern Tanzania located in Morogoro region Tanzania, Mikumi sits in an area of 3,230 square kilometers making it the fourth largest national park in Tanzania. Mikumi borders the largest game reserve not only in Tanzania but in Africa, The Uluguru Mountains and Udzungwa Mountains

It’s always called the second Serengeti due to the population of animals found in the park, scattered dotted Acacia trees, Boabab trees and others. Mikumi inhabits wide range of animals in large numbers like wildebeest, zebras, Buffalos, lions, elephants, Impalas, Giraffes and many more and primates like Yellow baboons, monkeys mention but a few.

The Makta Floodplains are worth visiting due to its great diversity and concentration of wildlife which graze in a mixed up format that is different animals grazing together at the same time which is always not much common in different parks. Mikumi national park is best visited during dry season for great enjoyment and clear view of animals.

Tarangire national park was established in 1970, located in greater Serengeti national park region in the Northern Tanzania is one of the best national parks to visit with large herds of animals especially the Elephants. Tarangire is the 6th largest park in Tanzania covering an area of 2,850 square kilometers.

The park is easily accessible through the tarmac road from Arusha only two hours’ drive through Karatu town and Babati before you turn to the bumpy local road passing through the maasai villages. The park attains its name from the Tarangire river which runs across the park and acts as a primary water source for wildlife especially during dry season when water is scarce.

The Tarangire national park is much famous for its over wailing population of Elephants and the Baobab trees which just welcome you at the park gate not forgetting the Ash Sterlings.  Other animals at the park are Zebras, Gazelle, Eland, Impalas, giraffe, buffalos, dik dik, African wild dogs, Cheetahs, Leopards, Lions, olive baboons, wildebeest and others. Tarangire has a great record of the oldest Elephant which gave birth to twins which were very healthy, the park in habits over 550 bird species.

Ruaha Ntaional park was named after the great Ruaha River which flows across the park to the south-eastern side, this is the back born of the wildlife. During dry season all animals cross to this river for water and fresh grass at the river banks making game drives during dry season more experiential than Rainy season.

The park has two airstrips those are Jongomeru Airstrip just next to the Jongomeru ranger post and Msenbe airstrip located at the park headquarters. The park can also be accessed by road though its bumpy road and worse during the rainy season when the road is more muddy

The most noted animals at the park are Cheetahs, lions, leopards, wild dogs, giraffes, Hyenas, buffalos, Sable Antelope, hippos, Elephants and many more not forgetting over 571 bird species.

Mkomazi National Park found in the North Eastern part of Tanzania near the border of Kenya and Tanzania in Kilimanjaro region in Lushoto District. First established as a Game reserve in 1951 and later in 2006 upgraded to the status of the National park. It occupies an area of over 3,234 square kilometres, dominated by Acacia-Commiphora vegetation. The inhabitants of the park are wild dogs, Black Rhinos, Lions, Hartebeest, Eland, Zebra, Elephants and others.

The Tanzania game reserves are:

The conservation area has great attractions like the crater, Oldupai Gorge, wildlife, Birds and cultural tours to the local Maasai people. Ngorongoro conservation Area is one of the most famous tourist sites in Tanzania.

Selous Game Reserve is located in the Southern Tanzania covering an area of 50,000square kilometres established in 1922 and declared Heritage site in 1982. Selous Game Reserve is the largest Game reserve not only in Tanzania but also in Africa at large. The reserve inhabits a lot of wildlife that include Black Rhino, Elephants, Hippos, Lions, Wild dogs, Buffalos, Giraffes, Zebras, Crocodiles, and many more.

The game reserve was named after the prominent Frederick Selous who was known as big game hunter and conservationists who died in 1917 at Beho Beho. The park is trans crossed by the Rufiji River that cuts the North park where most of the Game drives and photography is done while the southern is still used as spot hunting zone. The common activities are game viewing, walking safaris, canoeing, spot hunting and birding.